George P. Bush, who does does not share the rest of his extended family’s disdain for Donald Trump, is a rising political force in Texas. He’s running for reelection in his statewide job (and presumably stepping stone to higher office) of State Land Commissioner. However, Jeb Bush’s son seems to be tripping over his military service record. 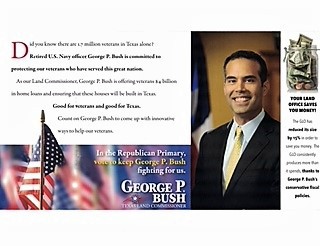 W. Gardner Selby just wrote a piece about a recent mailer Bush sent out to Texans. He claims to be a “Retired U.S. Navy officer,” but those with military experience or connections thereto know that “retirement” is different than “veteran.” It takes a career to retire and it comes with far more benefits than those who separate after one or two hitches in uniform. Don’t expect the campaign to make the same error twice if this turns into bigger news.

Utterly irrelevant side note for full disclosure: I once got George P. Bush out. In the early ’00s, both he and I were students at the University of Texas and played intramural softball. He was a law student, I in political science (our team name: “The Regime”). Bush batted left and I played deep right. They crushed us in the final score, but I found the right spot in the outfield to wait. The ball stayed in the air for about a week (he did *not* inherit a “low energy” swing from his dad), but I got it.

View all posts by Jeremy Teigen

Updates on the intersection of previous military service and electoral politics: history and today