In 2016, Democrats nominated 173 candidates to take on Republican incumbents in the House of Representatives while Republicans chose 102 people to take on Democratic incumbents. Ignoring open seats (as well as California and the other states with top-two nominating systems), I plotted the kinds of districts where these nominations took place to contrast where military veterans were nominated versus nonveterans. 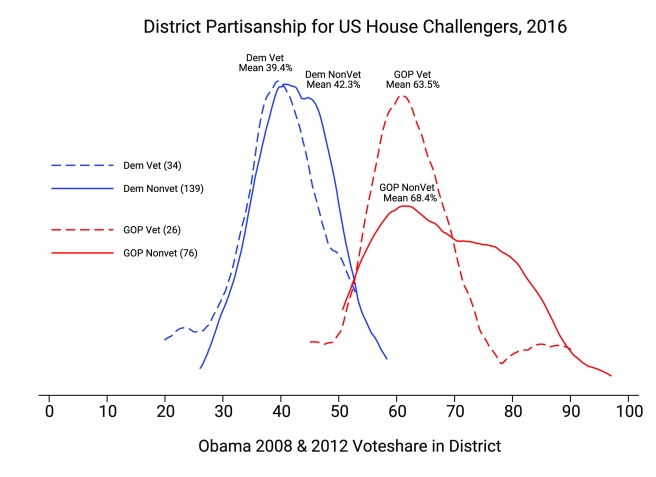 This says that both parties are nominating a lot of military veterans, but Republicans do so in more competitive districts (at least in 2016) than the Democrats do.

This seems a bit odd, given that Democrats have very recently signaled that they hope to nominate veterans and highlight them as a theme.

It’s not the first time Democrats have signaled the importance of veteran candidacies. In 2006, Democrats nominated even more Democrats to run than 2016, the “Fighting Dems,” but they mostly lost–largely because they ran in districts where Democrats had little hope of prevailing, irrespective of the quality of the candidate.

View all posts by Jeremy Teigen

5 thoughts on “Democrats seek veteran candidates, but this is not the first time: district partisanship matters”

Updates on the intersection of previous military service and electoral politics: history and today